I wasn’t kidding when I said there was copious amounts of pregnancy sewing to document.

Around month three, (so, June) I started to feel uncomfortable in my existing clothes. My belly was puffy and I was afraid I was going to keep setting new personal records for bust measurements. My summer uniform of silk shirts and cropped pants was only going to work if those silk shirts became much more voluminous. 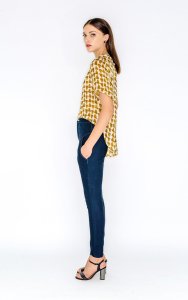 Because of both the change in seasons and change in belly size, I wore this mostly just up until month 8, though most of these pictures are taken at 37 weeks — so, nearly month 9. I often (though not in these pictures) wore an unbottoned blazer on top of it and other billow-y tops. It helped control the overall volume, and it took until maybe month six or seven before people who weren’t looking for it started to notice the pregnancy in that type of outfit. I’m hoping the big side slits mean this will be a nursing-friendly post-pregnancy top, but one step at a time here.

Here’s a dirty mirror selfie of the top several months ago, where it actually does a decent job of drawing attention away from the bump, which was sometimes what I wanted: 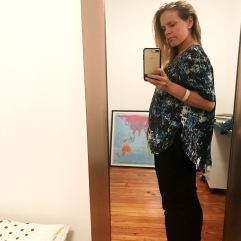 It’s the flowy nature of this top — and particularly the massive back pleat– make it suitable for pregnancy. For me, there’s the selling point of the volume coming from the architectural back pleat, rather than ruffles and pleating common to maternity wear. The only thing that presents a problem for a pregbod is the cropped front, but that was a very easy change. See, not cropped: 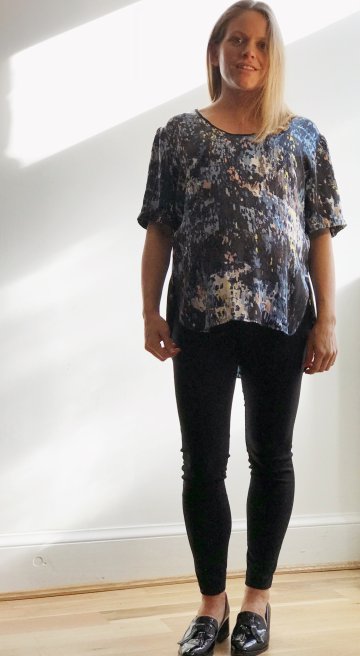 :: I cut an extra small at the shoulders, grading to a medium by the bust area.

:: I added 5.5” to the bottom hem at the center front. I curved the edges back up along the sides, so the front and back more or less mirror one another. Like I said, super easy.

:: The back keyhole is quite large and low. I would raise it by about 1.5” on any future iteration to avoid bra show. As it stands, I can’t really wear this without a cami underneath. The side slits are one reason, but covering up back bra band is another (you can see the black undershirt creeping up in the back shot pic). 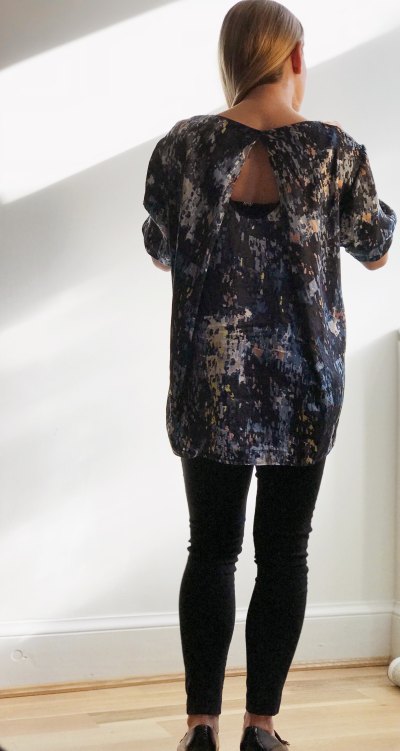 :: I don’t know if it was preg-brain or what, but I could not figure out construction of the binding+back pleat from the included instructions. Luckily, just as I was about to make this, they put up a tutorial on their site with things explained in a way just different enough for me to comprehend.

:: Just FYI that if you follow the instructions, your bias binding will show in the front. That’s totally fine, but it does not show in the back so it looks a little silly at the shoulder seams if you don’t use self-fabric for the binding. 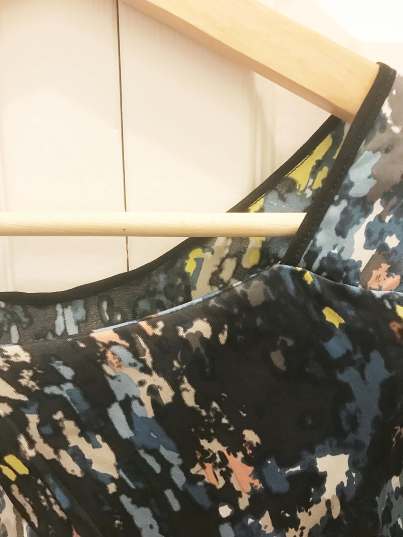 I got lazy with the binding and used some I’d already made from black silk crepe de chine rather than making new binding from the same fabric. It ended up being a blessing that I didn’t try to use the scraps to make bias binding (see below), but I don’t super love the contrast black.

:: As it turns out I needed all the scraps I had of this abstract silk charmeuse from   Mood Fabrics. I completely effed up cutting one of the sleeves and didn’t realize until I was almost done that I was missing about half the sleeve cap. Luckily, there was enough fabric left to cut two half sleeves along the selvage, which I then stitched together to make one sleeve. On a pattern so busy, this is so unnoticable that I completely forgot it happened until I went back to the notes I took at the time of construction. 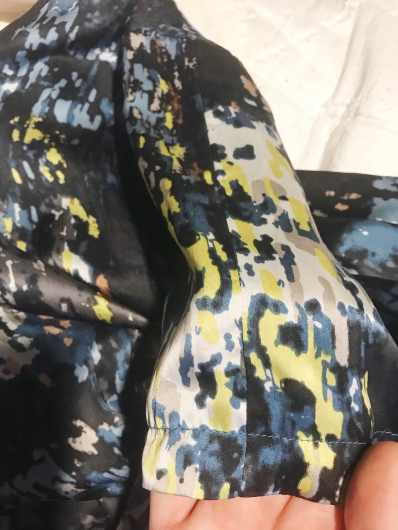 And there you have it: a silk top for pregnancy that doesn’t even have a bow on the belly.