I was probably watching too much Scandal or something back in the late summer/early fall, because I had it in my head that I wanted a massive coat with massive lapels and no closures.

So I made this ginormous wrap coat. 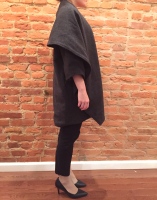 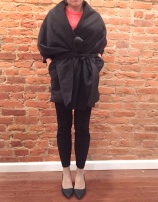 This was a project that captured my imagination on like a Sunday night, reached fever contemplating-pitch on a Monday, and — left unsupervised by a husband who works nights — I ended up cutting it out and sewing it with two nights left before a week of travel for work.

In my defense, it is called ‘VERY EASY VOGUE’, and in Vogue’s defense, that label’s pretty appropriate. But for my sanity I’m trying to stay focused on less feverish sewing at the moment. 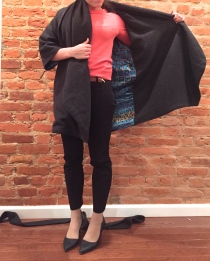 <– Check out that lining. It’s pretty ugs ‘abstract plaid’ silk charmeuse, but ugly silk has its own special role as the sweeeet lining in solid garments.

On to the pattern:

I’ve seen this called a [Dad, stop reading] vagina coat. I mean, maybe. If you get creative and also squint really hard with this photo?

No one should wear it like that. Unless unexpected rain.

I actually think it’s a decent pattern. Not in the XTREME SEWING TAILORING SKILLS way, but the thing’s got nice style lines that are good-looking but not totally common. For this version, I was mostly getting my inspiration off of homegirl pixie cut (yet again) in this drawing: I made View C, which is fully lined and has in-seam pockets instead of patch pockets.

Here’s what’s awesome about the pattern:

1. Ginormous collar that looks awesome. And can serve as vagina hood [sorry Dad] if you get caught in the rain unexpectedly.

3. 5/6ths sleeves that sort of give you venting that you sometimes need when walking fast in the city in the cold.

Mostly a tip here: It takes up less fabric than the pattern envelope says. I squeezed mine out of 3 yards of napped 60″ fabric and still had enough for the belt. The envelope says you need 4 and 1/8 yards. Lies.

Also, it does not come with a sash, but you’ll want one for cold/windy days.

To be fair to anyone thinking of sewing it, it kind of hangs like this on its own sans sash if you aren’t careful:

1. I underlined it, but I made this back in September when I was still mostly terrified of interfacing. Instead, I used silk organza as an underlining. While the silk organza wasn’t a mistake necessarily, I think the lighter-than-melton wool needed somewhat firmer support from, say, a fusible interfacing.

The garment itself is so unstructured and has so few seam lines that I think the fabric really needs some extra heft. The material is a really, really lovely wool-cashmere suiting blend that I bought at the end of last winter from FabricMart. It’s very warm, and it is very soft. But despite it’s warmth, it really is a heavy suiting material rather than a coating material, and it could use a little backup.

Backing with silk organza just doesn’t seem to do it in the way I was hoping.

2. Also, the lining is always sliding all over the damn place. Can you see those wrinkles in the front corner and around the back hem? I think this stems from the fact that the lining and the coat aren’t staying aligned at the shoulder seam. As a VERY EASY pattern, the instructions tell you to just bag all 800 meters or whatever of the coat and flip it inside out and VOILAihazcoat. But. I think it would have benefited from some loose tacks at key points in order to keep the seam allowances of the lining and seam allowances of the coat body in line with one another. This would also be VERY EASY, but the instructions don’t say to do so and I was a naive and rushed little coatmaker.

I keep meaning to open up the coat at the hem and sew a couple of tacks at the shoulder and armpits and probably center back, but I keep meaning to stop being lazy in other aspects of my life as well and have yet to succeed, so there you have it.

But it is a coat! And I did make it! I wear it a lot and stay pretty warm in it down to about 40 degrees (Farenheit…). And I do get complements on it, actually. Even unsolicited ones. So we can chalk it up to a success, right?

#memademay day 10 but really only day 2 for me. ⠀ ⠀ I made a thing that is not a mask! Then I put that thing in my body and wore it outside today.⠀ ⠀ This is the Kalle shirt dress from @closetcase.patterns and a piece of non black maternity wear. (I’m getting real sick of black, and normally I ❤️ it.) ⠀ ⠀ This dress has a ton of ease already, so I actually went with my pre pregnancy size, and then did a 1” full bust adjustment. I also lowered the front hem to align with the back. The extreme hi-lo hem is cute but not really for me and defffff not for a baby bump. I also added a self belt and belt carriers. I’m only 5’3”, and didn’t shorten this pattern anywhere, including the sleeves where I generally lop off an inch or two. ⠀ ⠀ If you look too closely you’ll notice the cuffs are of a slightly different chambray. Not on purpose but I only cut 2 cuff pieces before using the rest of the chambray for masks so here we are with a bit of light contrast. 🤷🏼‍♀️⠀ ⠀ The most important thing about this is that I conquered my fear of buttonholes! I’ve been sewing an awful long time to still be avoiding them. I have a mechanical machine (Viking 116) and hadn’t taken the time to figure out the foot. It works about 80% of the time, which is not terrible. The other times it makes one side of the buttonhole but refuses to turn and come back, so I execute a bit of a work around. ⠀ ⠀ #memademay20 #dcsews #sewing #kalleshirtdress #maternitysewing #maternitysewingpattern #isewlation #isolationcreation
%d bloggers like this: