So here we go with my second and third attempts at the Manhattan trousers. My wardrobe has suffered from a dearth of pants for a while (because of myriad of fitting issues + reluctance to go shopping since I think I should be able to make them). I was able to make things work through about the end of October, but then it got too cold for ankle-length pants with flats and it was time to sort that situation.

I had mixed success, but I’ve got two new pants to show for it.

First, the pattern: this is the Skinny Bitch Curvy Chick Manhattan trouser. It’s a good little pattern, especially if you’re short and not super confident in your pants fitting skills. I’ve made it once before, pre-serger acquisition, so the finishing was much worse. I found it really helpful to work off a pattern I already know is made with petite adjustments. For the fly-shy: after rejigging the waist band pattern last time, I successfully overcame my fear of fly fronts on this pair using nothing other than the SBCC directions, so that’s a win.

Now, let’s look at that first pair, made with some marled wool-spandex fabric from Gorgeous Fabrics (a bit scratchy on the skin, btw).

Not too bad. From the front.

But turn these things around. 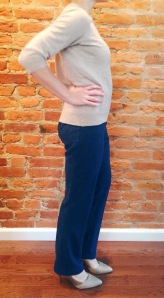 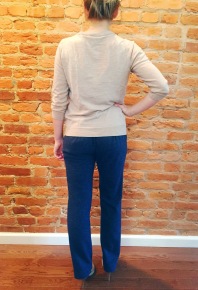 Wait, let’s lift up that shirt and get a closer look at some of those wrinkles. 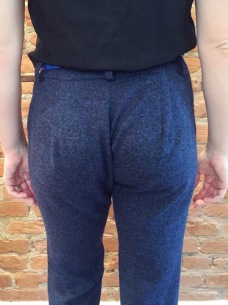 As discussed at DC sewing drinks, it looks like my ass is actively trying to swallow those pants.

I made these with a size 8 waist, grading to a 6 at the hips. I then added the missing inches back into the seat with a full butt adjustment (full seat adjustment? I don’t know). That’s a pretty standard adjustment to account for my lack of hips but possession of said ass.

For one thing the sizing is off. I lost a few pounds in October because of a concerted effort to eat better. I remeasured myself only after making these pants (dumb.) and I was down two inches in the waist and one in the hips. That puts me in the size 4 range, two whole sizes down from what I’d used.

I took out a massive second vertical dart on each side to pull in the waist and hips, but these pants are really only wearable if I have on a hip length top that conceals the hack job that is the back side.

For the second pair, I traced off a straight size 4, and then added an extra 1” with a full butt adjustment. They’re much, much better, but they aren’t perfect.

First, you can see the back side wrinkles are still there. I’m going to try to do a sway back adjustment on the next iteration, which will pull out  a bit of the length from that back crotch curve.

Second, they are very tight on my quads. I could get them on when I first sewed them up, but it was a little obscene. So I stole back all I could from the 4/8” seam allowance at both the inner and outer thigh seams — I probably gained about 1/4” at each seam, so 1/2” of the leg. I’ll do a full thigh adjustment on the next pair.

I also plan on adding 1” of circumference to the bottom of the leg on the next pair for this length. The bottom hem gets caught on my boots and the back heel of my shoe sometimes.  Like in this picture.

But, you know, pants! Progress.

#memademay day 10 but really only day 2 for me. ⠀ ⠀ I made a thing that is not a mask! Then I put that thing in my body and wore it outside today.⠀ ⠀ This is the Kalle shirt dress from @closetcase.patterns and a piece of non black maternity wear. (I’m getting real sick of black, and normally I ❤️ it.) ⠀ ⠀ This dress has a ton of ease already, so I actually went with my pre pregnancy size, and then did a 1” full bust adjustment. I also lowered the front hem to align with the back. The extreme hi-lo hem is cute but not really for me and defffff not for a baby bump. I also added a self belt and belt carriers. I’m only 5’3”, and didn’t shorten this pattern anywhere, including the sleeves where I generally lop off an inch or two. ⠀ ⠀ If you look too closely you’ll notice the cuffs are of a slightly different chambray. Not on purpose but I only cut 2 cuff pieces before using the rest of the chambray for masks so here we are with a bit of light contrast. 🤷🏼‍♀️⠀ ⠀ The most important thing about this is that I conquered my fear of buttonholes! I’ve been sewing an awful long time to still be avoiding them. I have a mechanical machine (Viking 116) and hadn’t taken the time to figure out the foot. It works about 80% of the time, which is not terrible. The other times it makes one side of the buttonhole but refuses to turn and come back, so I execute a bit of a work around. ⠀ ⠀ #memademay20 #dcsews #sewing #kalleshirtdress #maternitysewing #maternitysewingpattern #isewlation #isolationcreation
%d bloggers like this: