There are a few garments in my closet that I made in a fit of holy-shit-it’s-hot-out-get-me-some-silk-tshirts last summer.

I haven’t blogged them. Because they’re basic. And they were made in aforementioned fit. But they’re also some of my most-worn items, so it’s about time. Here, I give you my favorite silk t-shirt:

True, it’s a little big and flowy and unremarkable. But who doesn’t like a big flowy silk tee to wear to work in the summer. This is my white silk crepe version. I also have a black silk satin (satin side faces me, because daily luxuries) version and one in this weird little black-and-pink-and-white-and-blue diamond print silk crepe. 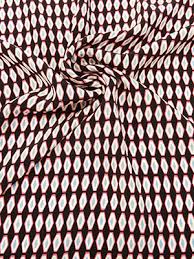 Yes, I know it’s a dick move not to have photos of said shirt. But I’ve been waiting like a year for the magic of photographer + sunlight + wearing aforementioned shirt and it just hasn’t happened. 😦

(Also, not pictured: this thing looks great tucked in to a high-waisted pencil skirt).

This pattern is originally Marfy 3400 that’s been a little hacked. Only a little. It’s sort of unremarkable so I wasn’t really motivated to share, but recently I saw Grainline’s Penny tee debut — and people making it up — so I thought maybe there is enough interest in a boxy flowy top to make sharing this worthwhile.

First, a note: if you aren’t a fashion type, or just super good at spatial reasoning, translating the Marfy stylized drawings to a picture of what those drawings might look on you is pretty hard. For example, here is the one for 3400: 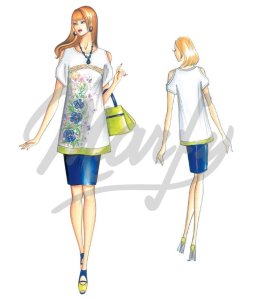 So hard, in fact, that I haven’t really done it since buying this 2014/2015 catalog on pre-order with free shipping included. Something about being a supernovice a couple years ago made me deluded enough to think I could sew what they were offering (hah.).

The catalogs come with free patterns, including 3400, printed in layers on one very big sheet, Burda or Patrones style. They can also be fashion-forward, but it’s hard to appreciate given the clashing colors and 1992-style eye makeup on the fashion drawing models.

For example, 3400 was actually originally a cold-shoulder top. Released 2.5 years ago. So fashion-forward, plebes like me didn’t understand that it was cutting edge and not out-dated.

ANYWAY, since I am plebe, I got rid of those exposed shoulders, simply by redrawing the concave shoulder seam to a slightly convex one. I also got rid of that weird peek-a-boo chest plate thing that will probably be in vogue next February (probably.).  I also chopped off probably 2 inches of length but it’s been a while so having a hard time remembers.

The only other style elements that are left are tiny pleats at the front underarm and back side seam that give a slight shaping, and the nice little way the armhole sort of pops up at the top of the arm. 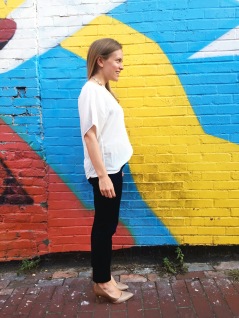 I first made it here. That one hit the trash a long time ago — my month 3 sewing life attempt at rolled hems was just like you might imagine. But the three 3400s I’ve made since then are awesome wardrobe workhorses.

As for construction now: all the seams (all four of them) are done with french seams. The neck hole, arm holes and hem are all finished with double fold bias binding. I finally figured out how do do that properly for this top, so here’s to no more puckers at the neck and arms.

Also. That catalog is 2 catalogs ago and as of writing on sale for 13.99 euro (post-Brexit roughly equal to 4 horses plus one Angela, I think!). Also also, it’s one of the rare Marfy patterns available by pdf. For 6.5 euro, which makes it actually cheaper than a Penny, if you came here for the shitty puns.