It’s been a minute since the last post, and I have a lot of garments I want to write about. Thing is, if past is any prologue, it might not happen; I keep choosing sewing over blogging when apportioning my hobby time. So, knowing this but also knowing I’ve got a few thoughts I want to share on past projects, I present you: a smattering of garments made but not yet logged. There are a few more banked that deserve greater attention and I’ll write about at more length. But for now, some thoughts on McCall’s 6927 tee shirt in silk; Style Arc’s Gabriella skirt; Collette’s Wren dress; Style Arc’s little french jacket (nee Livia); and Schnittchen’s Coco Jacket.

McCall’s 6927:  I can’t believe I fell down on the write-up job with this pattern so hard. Look, I even made a text-y photo for this one, thinking I’d write it up right away.

This is great silk crepe, from Emma One Sock. I like that t-shirts are work wear, so long as they’re in fancy fabric, and this pattern is a great jumping off point with different pattern pieces for different cup sizes. I made View D in a size 8 with the D-cup bodice, but that was wrong. It works, but there’s not quite enough ease, particularly in the upper back. In the future I’d do a size 10 with a D cup. The sleeves have too much ease in the sleeve cap as per usual for Vogue/McCall’s/Butterick/etc, so I’d take some of that out as well in any future projects (using this tutorial). Another note: the back hem on the high-low shirttail hem is stupid long. I took an inch out of the length from below the waist from both the front and the back before cutting out the pattern. But once I tried the shirt on, I needed to take another two inches out of the back length in order for it to hit above my butt.

Construction-wise, I used french seams throughout (including on the sleeves thanks to Grainline’s tutorial) and used bias tape made from the stripey fabric. I made it visible, so it’s a little bit of a feature, which I like.

Colette Wren: I actually made this three times: once as a quick muslin in some ITY jersey; once in some uncomfortably itchy wool knit that shrunk before I finally figured out what was wrong with my serger; and finally in a St. John wool blend from Emma One Sock that is on the beefier side (read: totally suitable for a dress or skirt) and warm without being itchy.

I think that may be a slightly different colorway, but the fabric is the same and I’d highly recommend it. Yes, I basically single-white-femaled Sarai’s dress, but eh, so what.

As for the pattern, at 5’3” I took a small amount of length out of the bodice above the bust line, which raises the neck line a bit. Otherwise, no adjustments, though I wish I’d done a small sway-back adjustment. So if that’s something you’d usually do, do it here as well. See: 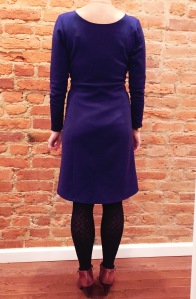 Style Arc Gabriella: I made this to replace a flared navy skirt I had from J. Crew. 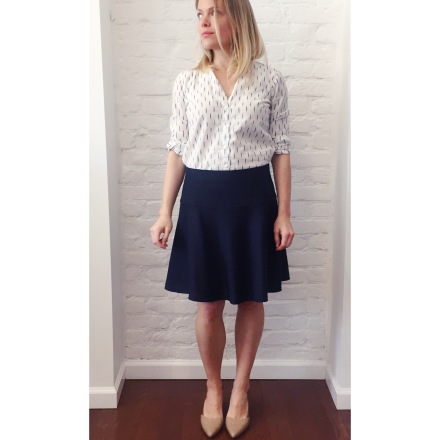 I  liked the shape but it was a bit on the short side and eventually I got self conscious that I looked a bit cheerleader-y. This is wool from the stash, originally from Fabric Mart. I lined it with silk, also from the stash and also originally from Fabric Mart. That was sold as charmeuse, but it feels a bit off. It’s thin and it has one smooth side and one flat, but it’s not very drapey at all. It works totally fine as a lining on this bias-cut skirt but I was a little disappointed when I got it, what, like three years ago.

Anyway, I kind of threw instructions to the wind (because Style Arc), constructing the outer skirt first, then the inner skirt (waistband and lining), and then using this tutorial for inserting an invisible zip. I used a size 8, but on my boyish hips, this falls a little lower down than I’d like, so consider the similarly hipless amongst you warned.

I finished it in March, though, when the autumnal spice colorway — an awesome knit also from Emma One Sock — was pretty out of season so I’ve never worn it. This is unlined which I feel kind of eh about, but it would be pretty easy to draft your own lining. Since I was feeling lazy, I just finished the edges of all the pieces with the serger. I didn’t include the hook-and-eye closure as the top, because I don’t like how that pushes the bottom hem out from the body. I did adjust the pattern try to straighten out the angled portion at the top of the center seam in order to get the jacket to hang straight, but that was unnecessary and in fact made the pieces overlap at the top and I had to undo it. What I’m saying is, trust the pattern even though that line drawing makes it look like you’re going to have billowing out below the collar. You won’t. I also did a full bust adjustment.

Schnittchen Coco Jacket: Also stupid easy in terms of construction. This is a darted bodice, like the Livia, rather than a princess-seam one like more sophisticated little french jacket patterns. 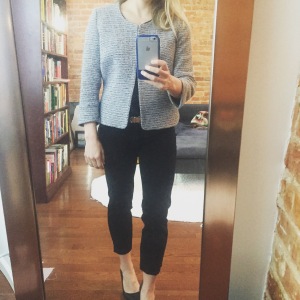 Unlike the Livia, this one is lined, which is nice. The top collar is rounded, which I don’t dislike as much as I thought I would. This has a more basic pattern in the back (read: no princess seams) than the Livia, but there is shaping in the center back seam, which helps. No, I don’t have a photo of that because even though I wore this about once per week from April through June, I never got any stupid photos except for that one right up above — sorry, am hanging head in sewing blogger guilt as you read this. This fabric also an Emma One Sock knit (a Rebecca Taylor surplus). Also great, though the loose weave snags a fair bit, even on my very flat rings. It’s lined with some stretch silk charmeuse bought from Fabric Mart in a nutso Catherine Malandrino print, so that’s fun — it’s not a knit but does the job fairly well since the jacket isn’t body conscious and the fabric doesn’t stretch too much during regular movement.

That’s about it for now. We’ve still got two Inari dresses and this Vannessa Pouzet tent dress to contemplate but all in good time. Just hopefully less good time than before.