You know those friends you have who tell you your handmade dress looks great when actually they should be telling you it looks handmade because you didn’t press your damn seams?

And then you know those friends you have who scrunch up their noses when you put something on and say ‘erm, I like that other thing you were wearing better’? That second friend is the one you trust. 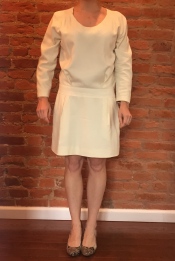 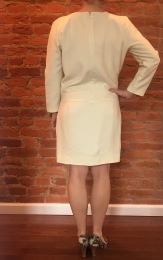 This is the Aime Comme Marie , Aime Comme Mon Petite Bazar. It’s a drop waist dress, which, shocker, meant I was attracted to it. But I was attracted to a lot of her stuff around this time last year and bought two patterns — this one, and the mens lounge pant, which I’ve successfully made three times (but never written about).
First up, the pattern itself:
There are no seam allowances on the pattern pieces, so tracing out is a must.
The pattern pieces come on one sheet and the sizes overlap one another — rather than being nested — so grading between sizes isn’t easy. For me, that’s annoying enough to be a deterrent from buying patterns from them in the future, especially given the price point.
Because this is a raglan sleeve dress it’s supefast to put together, which is a big plus. My French is no good, but I have enough vocabulary for and the line drawings were good enough that I muddled through without too much trouble. The pocket part was a bit awkward, but I did a practice run on the muslin and things went fine. I think this would be a super fast and fun make if you had a serger and weren’t scared about raw edges in your dresses.
But me: I underlined fairly thin wool crepe (which was basically see through) with some thin silk crepe. Both are crisper than expected, but it works okay in the dress I think.  I then fully lined it, rather than repeating this experience with seam binding. Scared of raw edges.
The biggest problem, though, is that it’s just not the right size. I think I might’ve been suffering a bout of body cognitive dissonance when I was tracing it out, (not the first time) because I cut a medium. Bad decision. Europeans: they’re smaller than your average American, maybe. But they’re still the same species.
I took two and a half inches off the front and back. I also did a half-inch sway back adjustment. But in retrospect, I didn’t grade to zero at the waist. Which, as the gifted mathematicians among you will have figured out, means my back piece is shorter than my front piece. I think that might go some way in explaining a few fitting issues, but certainly not all.
This dress is a further demonstration that my back waist is just very short. Short back adjustments from now on. I got a very friendly email pointing out this consistent problem on my makes from Beth at SunnyGal Studio. She pointed me to this. It was too late for this dress, but a helpful pointer since this isn’t the first fail from a mid-back poof.

.
I did add the removed bodice length to  the bottom of the skirt– this was intended for work, after all — but I ended up taking it all out. The billowy top balances out the small skirt okay.
And finally! I did a full bust adjustment. The top felt tight across my full bust area even though it’s loose elsewhere in the bodice. This seemed quite common when I went around the Internet and took a look at the dresses others had made. I followed this Colette tutorial for raglan sleeve bust adjustments tutorial, and just deepened the pleat at the waist line.
But because I am a dunce, I forgot to fold the fabric in a way the would ensure the pleat remained in the same place. As a result the skirt and bodice pleats don’t align on my finished dress the way they do in the pattern line drawing. Eh. I don’t beat myself up too badly about that. 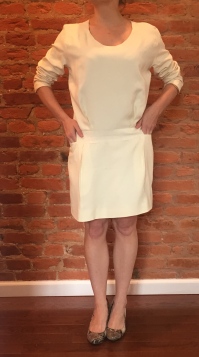 Still, because I selected the wrong size, once I had the dress together I ended up using 1 inch side seams to thin it a bit.
That wasn’t enough. To salvage it, I’d have to disassemble the thing, use slightly wider seam allowances at the side seams and also the raglan sleeve seams, and I’d reduce the back length at the center.
It’s hard to get up for the deconstruction game, so I haven’t done it yet. Here are some shots of me trying to make it look not terrible. 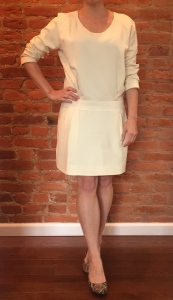