So I recently had an answer to the question ‘what will I sew for once my friends are done getting married?’, and that answer is: work-related black tie events.

This is the Named Patterns Kielo Wrap dress, and I really like it! 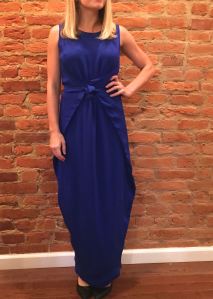 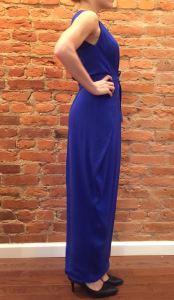 There were several of these on the internets, I liked the pattern envelope image. But I wasn’t particularly motivated to buy the pattern until I saw these two iterations of the dress.

I had already picked out this royal blue stretch silk from Gorgeous Fabrics, initially to make this dress. But after some last minute second-guessing and spousal nose up-turning, I rededicated it to this Kielo!

Unwrapped, the dress is essentially shaped like a curvy hexagon, with tails coming out of the side corners. It also mildly resembles one of those squirrel suits that mentalists wear to jump off cliffs. This is not for cliff jumping.

There are only three pattern pieces: the front, which is cut on the fold; the back, which you cut two of, and the wrap ties.

I used a printed Named pattern, but let me tell you. The printed versions of the patterns don’t come with seam allowances. I’m not going to whinge too much about that, especially since I had recently done myself the favor of buying the SA curve ruler, but you should know that’s a thing. Forewarned is forearmed, etc. [Eh hem, also, the front and back pieces are split in two horizontally and placed in different spots on the sheet. Tracing is a must, and not just because of the seam allowances.]

I made several modifications to account for the fact that I’m 5’3″ and Named is designed for a 5’8″ woman (do the humans generally come that tall in Scandanavia?). I shortened the pattern in several places by drawing horizontal lines perpendicular to the grain line, and then overlapping the pattern pieces and blending the seam lines. [**edited to add: I cut a size 40 at the chest, grading down to 36 at the waist to fudge a full bust adjustment. This is a bit of a dodgy grading, since the patterns aren’t nested, but I traced the size 40, and then realigned it with the size 36 cf/cb to make the grading for the lower portion. Make sense? I used the armhole notches from the size 36, but I would maybe still go half an inch higher still]. Anyway, here are the cuts:

:: reduced 1″ where the top and bottom halves join

Those of you particularly adept at spacial reasoning will notice that the reductions above the armhole actually move the end of the bust dart closer to my, eh hem, bust point. Those of you who need an illustration:

Suffice it to say, I was lucky I had left those dart tails loose. I unpicked the darts and redrew them to stop an inch short. And now it’s fine!

::I underlined. For a formal dress, this was really necessary. The soft drape and thin hand of my fabric would have put all kinds of things on display, so I underlined with a silk stretch georgette that happened to be cheap at Fabric Mart when I was in the market.

Underlining was horrible. The crepe and georgette are fiddly and finicky and getting the two layers to match up in order to be basted together was the single most time-intensive part of this project. It took a days-worth of sewing time. Also, if you are feeling very fussy, your underlining should probably be similar in color to your dress. See that white peeking out from the back vent?

:: After hand basting the layers together, I then sewed them together using a 1/4″ seam allowance on my regular machine. This is because I didn’t yet trust myself to serge accurately. The 1/4″ stitching line serves as a guide in case you get your fabric a bit too close to the serger knife when finishing the seams. I’m a couple projects past this one now, and might be comfortable enough to take the training wheels off, but this was a good method for the time.

:: I then serged all the edges, except for the hem edge. Assembled you can make out the serging and the stitching line. 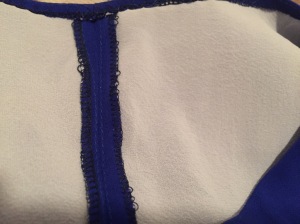 :: I assembled the dress. This took almost no time! It’s so easy.

:: I catch stitched the seam allowances down by hand. Because of the underlining, I was able to do this without catching the outside fabric, thereby avoiding itty bitty little catch stitching dents. It was tedious, but left a really, really nice finish. Also, I used blind stitch threat, which I did not know was a thing until recently. Glad I found out before this dress!

:: And finally, I did a machine-rolled hem using a 6mm rolled hem foot.

And then I got my hair did and wore that thing with a fake fur caplet to adult prom like I was supposed to do.

Also! I sat next to a woman who also made her dress. It was an Elisalex. Weird world.